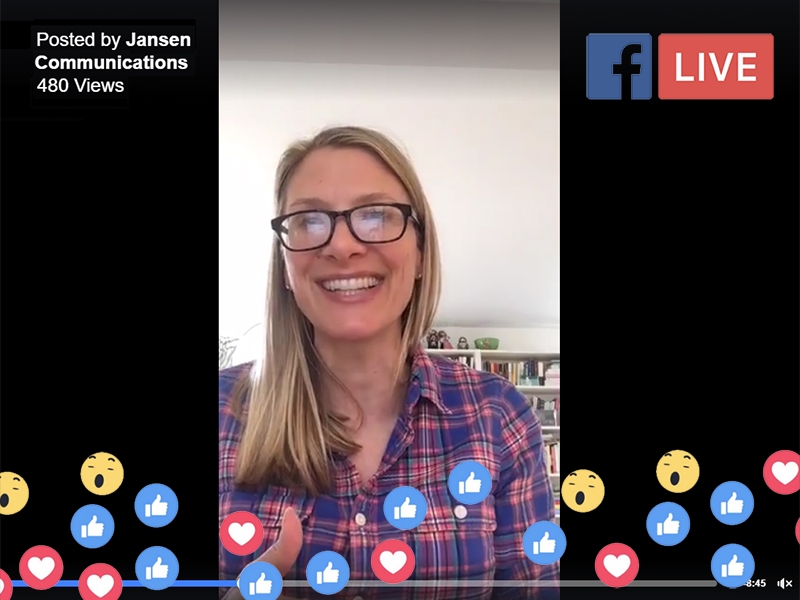 Yesterday, I did my first Facebook Live, and I am here to tell you that it was one of the smartest marketing moves I have ever made. In this post, I’m going tell you why – and what I learned from the experience.

Just a note before we dive in. I did Facebook Live through my company page, Jansen Communications. If you choose to do it through your personal page, you won’t have access to analytics (Insights in Facebook parlance), and you won’t be able to boost the recording after you’re done.

I also chose a pretty hot topic: how much social media marketing actually costs. So that helped make the experience a success.

Jess, the social media marketing guru here at Jansen Communications, helped – she created the event, joined it, boosted it, etc. So when I say “we,” I mean me and Jess.

Here’s what I learned doing my first Facebook Live:

I’ve done live and taped video before, so I wasn’t super nervous about being in front of the camera. But I was a little nervous, because hey, I was doing something new! I always get nervous before I do something for the first time. Don’t you?

Anyway, I simply reminded myself that I know my shit and that people like me. And if they don’t like me, that’s perfectly OK. They’re obviously not an ideal client for me or my team.

2. Go in with zero expectations

When you do something for the first time, you don’t know how it’s going to work out. Will it be awesome, or will it fall completely flat?

My only expectation was that it would be better than Periscope. Back in 2015, I did a weekly Periscope broadcast for a couple of months before abandoning the effort. In short, it sucked and had an ROI in the negative triple digits. But you don’t know ’til you try, and I’m still glad I tried.

The good news is, Facebook Live was a zillion times better.

3. Prepare to be (potentially) blown away by the engagement levels

Facebook Live left every other social media marketing tactic we’ve ever done in the dust. And now I’m sorry I didn’t try it sooner!

Our engagement levels are off the hook. We got a lot of Page likes, which is great, but the kicker is the number of comments and shares we got. So. Happy. And more than 24 hours later, engagement continues to climb.

We decided to turn Facebook Live into an event so we could promote it ahead of time. Though we only got a handful of RSVPs, I wasn’t worried. For one, it was our first time doing it. Second, Facebook Live videos get a ton of views as recordings (very true in our case!).

A couple of hours before my scheduled Facebook Live video, I wrote up notes around what I wanted to say. I kept those notes up on my computer screen during the broadcast, and I propped my phone up against my screen so the two were side-to-side.

I also practiced before I went live. Practice doesn’t make perfect (see below), but it definitely instills more confidence that you got this.

After showing the video to my kids after dinner last night, my daughter asked, “Did you put ‘um’ in your notes?”

If you need a drinking game, use my Facebook Live video and take a sip every time I say “um.” Don’t do shots, or you’ll be shit-faced in about three minutes.

After hearing myself say “um” like 78 times in 14 minutes, I now know I need to work on NOT saying it.

7. Don’t be shy about sharing – or asking for shares

I shared the event and video on my personal Facebook page, and my awesome team did as well. When I published the video, I straight up asked people to share it – and they did. So don’t be shy. Ask, and ye shall receive.

When I re-watched the video, I couldn’t believe how bad the glare was. My bright white computer screen reflected off my glasses, obscuring my eyes half the time. So annoying. Before my next video, I’ll fool around with the angle to ensure that doesn’t happen again.

I had a lot of fun doing the video, because I was me. I made mistakes, and I responded to a Slack message verbally. I went “off script,” and stopped making sense, so I apologized and moved on.

So go ahead and give Facebook Live a go. If it doesn’t work, that’s OK – at least you tried! You can check out my recording here.

8 Social Media Marketing Trends That Have Caught Our Attention