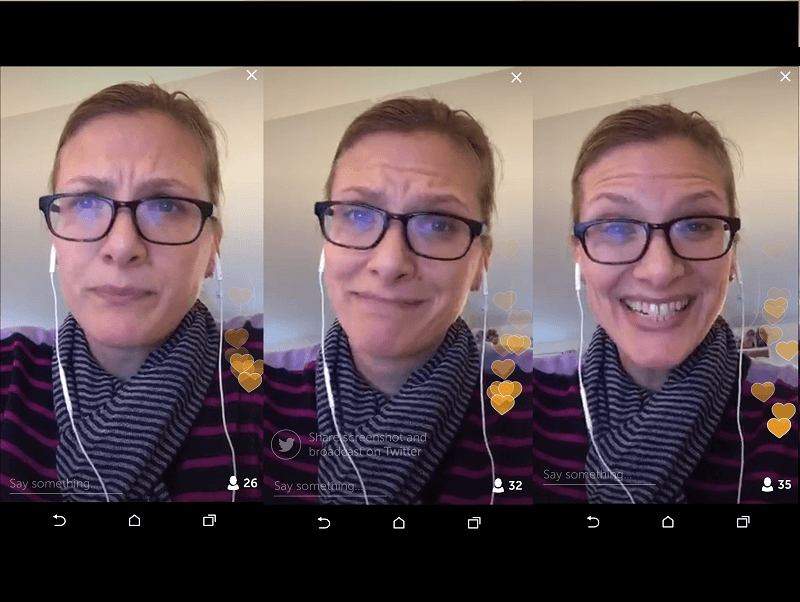 Posted at 14:38h in Social Media by Monika Jansen 0 Comments
1 Like

In July, Janine suggested we try out Persicope. My initial reaction was, “Sure!” It was brand new, and I hadn’t even considered using it, let alone using it for marketing. The more I thought about it, though, the more nervous I got. “Live video! Ohmygod. Do I really want to put myself out there?”

But then I thought, “Well, as a small business owner, I put myself out there all the time – how’s this any different?”

Lemme tell you something: live video broadcasting is WAY different than talking to someone face-to-face at a networking event. Way. Different. But it’s also super fun.

I’ve probably made every stupid mistake in the book since my first broadcast on September 3 – which means you don’t have to. Here’s how to get the most of a Periscope broadcast:

Use it to test ideas, not sell

I initially thought I would use Periscope to build brand awareness for my company, but my primary focus has definitely shifted. I use the broadcasts to get my ideas out there and see if they stick. People will either react – or ignore you. That kind of instant feedback is priceless.

Do a dry run first

This is actually something I did right! Mostly, anyway – I did a public test broadcast instead of a private one. If you do a public one, you will be distracted by people jumping on and asking questions, but at least you’ll be able to play around with the functionality.

To do a private broadcast:

Follow a friend and ask her to follow you back. Hit the “broadcast” icon, and right above the Start Broadcast button, you’ll see four options. The padlock allows you to do a private broadcast, so choose that and then pick your friend.

Periscope broadcasts are not supposed to be sleek and highly produced. They are authentic, unscripted and unfiltered. But there are four basic rules I’ve learned that will ensure your broadcast is a good one.

Learn how to block trolls

Trolls – people who want to disrupt the conversation – WILL join. I get a lot of lewd, X-rated comments – always fun – but I also get nonsense comments like “uuujjjjllffffl.” Two weeks ago, I actually had a troll taunt me!

As soon as I see a troll pop up, I will speak directly to them and say something like, “I can see you, and you’re not funny. Everyone on this broadcast can see you. You’re being an idiot [I use a stronger word here], so knock it off.”

If that doesn’t work, either Janine or I block them by swiping their comment. A little box will pop up; choose “block user.”

Use notes to keep you on track

Because people (and trolls) will pop up with questions and comments, it is VERY easy to get distracted and completely lose your train of thought. I probably lose my train of thought at least five times during a scope – and I keep my broadcasts to about 10 minutes! Write down a bulleted list of notes and ideas before you start – you will need them.

Ask someone to be your moderator

Janine is my moderator, so she gets to see all the crazy right along with me. She is great at blocking trolls, but she also jumps in and asks questions, replies to people’s comments, and invites all of her followers to join the broadcast.

I originally thought I’d talk mostly about marketing, but I have found that people are much more interested in talking about money, running a business, and saying no. My second most popular scope was on swearing at work; my most popular one was on telling clients/customers no. People loved that topic so much that my typically 10 minute scope lasted 23 minutes.

Of course, I had to experiment to find out what topics people care about, and that’ll probably be true for you, too. However, if your planned topic goes off on a tangent – and people are really engaging on the unplanned tangent – make a shift and talk about the tangent instead.

It will be weird. And it will be crazy. And you never know what will happen. But stick with it to see what happens! I’ve thought about quitting a couple of times, but because I only devote about 10 minutes to each scope, it’s not like I’m giving up gobs of valuable time. Plus, the more I do it, the more fun I have.

If you want to see me in action, I’m @monikacjansen, and I broadcast every Thursday at 1pm EST.

9 Ways to Make the Most of a Twitter Chat

Video Marketing for Beginners: How to Get Started