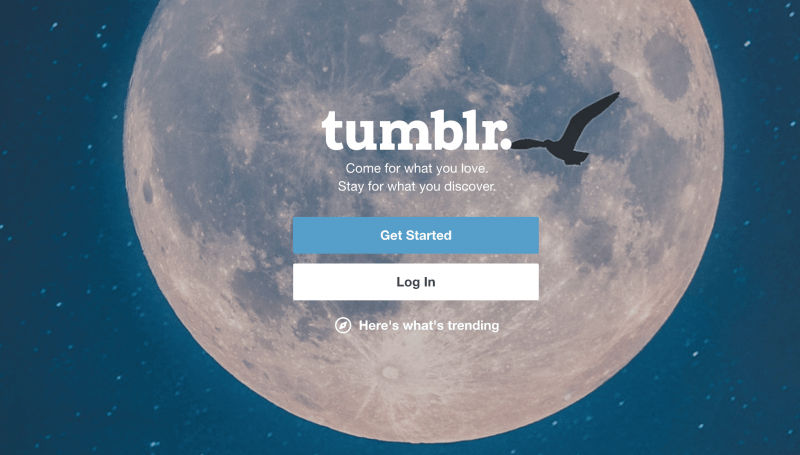 18 Apr Should You Be Using Tumblr for Marketing?

I never once thought about using Tumblr for marketing until someone in my network asked about it. So let’s talk about Tumblr – after we talk about what the hell it is.

Tumblr is a hybrid blog platform and social network. Users can post multimedia content (photos, graphics, videos, music, GIFS, etc.) to a blog, follow each other and comment on each other’s posts. (You do have the option to make your blog private.)

User numbers are hard to pin down, but suffice it to say that a lot of people use Tumblr – which surprised me! Depending on the source, Tumblr has either 200 million or just under 400 million blogs and 300 million or 550 million monthly users.

Most users are global – only 42% of traffic comes from the US. Users are also young – teens and Millennials. So it should come as no surprise that a vast majority of users visit the site from their mobile devices.

With that said, if you are trying to reach people between 13 and 30 years old around the world, yes, use Tumblr.

How is it different from other social networks?

The big focus on Tumblr is quality over quantity. Building meaningful relationships and interacting with other users is far more important than having a zillion followers or fans. So if you’re going to use it for marketing, you must commit to actively engaging with other people.

Also be aware that it’s filled with niche communities and subcultures, many of whom have their own quirky language.

How can I use Tumblr for marketing?

Unlike most of my posts on social media networking (like this one and this one), I had to do research on how to use Tumblr for marketing. Here’s what I learned:

Tumblr blogs tend to have catchy, clever or memorable names, like Awwcupy Wall Street. With that said, there’s nothing wrong with using your brand name. Plus, it’ll help with brand recognition.

Outright marketing messages on Tumblr will not go over well. You need to be subtle. Unleash your creative side and post content that is inspirational, aspirational and happy. Bonus points for humorous and clever posts.

Yes, it is OK to provide links to your website, especially if you’re running a special promotion. Just be sure those posts are more personal than what you might run on Facebook or Instagram.

The better you know your audience, the better your content will do on Tumblr – just like any other platform. What questions do your audience have? What information do they crave? That’s what you need to post on Tumblr.

Use tags to get found

Tags are just as important on Tumblr as hashtags are on Instagram – they’ll help your content get found in search. Seven to 12 tags per post is ideal – just make sure they’re search terms that people are using.

Because quality interaction is so important, the more you put in, the more you’ll get out. Follow other blogs and leave comments. This will raise your visibility and help you attract followers.

Not sure if Tumblr is for you?

Use our handy Small Business Guide to Social Media Marketing to figure out platforms are right for you – and what you should do once you’re there.

What to Do if No One Is Reading Your Blog

How to Start Blogging